Donnie is a orange and blue airplane who can invent things with his tools. He appeared in the very first episode of Super Wings "Shadow Play" and in the very last (of season 1), "Acting up". Jimbo aside, he is the co-protagonist that appears the most during the series, having starred in 15 episodes, not counting small appearances and cameos, which makes the total of appearances even higher. He is very skilled in solving problems using tools or building complicated machines. He is the only Super Wing who always seems to land in a clumsy way, falling over or hitting the ground.

Donnie is a Canadair airplane that looks a little funnier than regular Canadair airplanes, having a big hull and small wings and propellers. He is mainly yellow and has Amber coloured eyes. The edges of his wings, his motors, a part of his fore and legs and his screen are blue.

Donnie is very skilled at repairing and inventing things, using his "Kit of Extra Cool Tools". In the episode "Farmer Jett", for example, he rebuilds a farmyard from scratch in a few seconds. 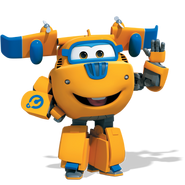 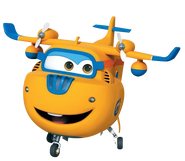 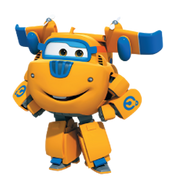 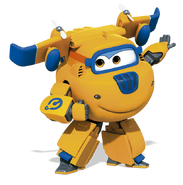 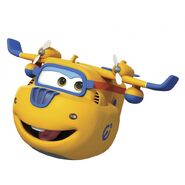 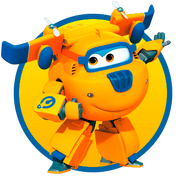 Add a photo to this gallery
Retrieved from "https://super-wings.fandom.com/wiki/Donnie?oldid=9053"
Community content is available under CC-BY-SA unless otherwise noted.